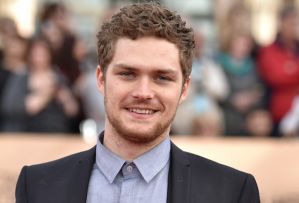 “Choosing to study my A-levels at Hayes was one of the best decisions I’ve ever made. Without it, I don't know where I would be. The Hayes Drama Department in particular was indispensable to my training and learning as an actor.The department aren’t JUST teachers; they're heroes that have become friends. They are putting their life and soul into helping young people realize and focus in on their dreams; passionately educating and inspiring students to break new boundaries and
excel.
Personally, the Hayes Drama Department had a huge impact on my career and gave me support, friendship and advice that I will carry throughout my life – and for that I am so very thankful.

So, to put it simply, the Drama Department at Hayes is, without a doubt BRILLIANT- in fact they are OUTSTANDING. Anyone who desires to have a career in drama, please, do yourself a favour and apply. Start your journey there - it's the only place to be.”
Finn went on the study acting at The Arts Educational School and has built an exceptionally successful Television and Film career, most famously playing Ser Loras Tyrell in the award winning HBO series Game of Thrones and the title character in Marvel/Netflix’s Iron Fist.

“GCSE and A Level Drama at Hayes not only gave me the skills to succeed in my pursuit to become a performer, but also the ability to present myself in any work environment with clarity and most of all confidence. Without taking this subject I would certainly not be the person I am today.”
Teegan left Hayes in 2016 and is now studying on the 3 year acting course at the prestigious Guildford School of Acting.

Durone is currently appearing in “DreamGirls” in the West End and is a regular cast member on E4s “Stage School”.

“Studying Drama at Hayes improved my public speaking skills no end, which in turn allowed me to progress and feel confident when presenting in the workplace. Not to mention it was the most fun I had at school…”
Ben Pirie is now one of the country’s most sought after Cyber Security Specialists.

“I had a wonderful experience studying Drama at Hayes, mostly due to the enthusiasm and support of the staff as well as the freedom we were given when producing our own work. It was at Hayes I made the decision to continue my education in theatre as it showed me many sides to the art that I had previously been unaware of. I remember it was specifically after the trip to Lodge Hill in the first year of sixth form that I realised the potential of theatre as a powerful and exciting medium of expression. A Level Drama shaped the path of my education - studying European Theatre at Rose Bruford Drama School - and professional experience – founding the physical/vocal theatre company Sound Boxed - ever since.”

“I started studying Drama and Theatre Studies at Hayes after having done my Drama GCSE. Although I harbored an absolute infatuation with acting, when I started at Hayes I had very little confidence in performance and limited experience of text and the world of theatre itself- both of which I needed to grow as an actor.
My time at Hayes allowed me to practice theatre in a supportive environment, where I was encouraged to be brave, open-minded and enthusiastic. I was given the opportunity to work within a strong and like-minded company, and was therefore able to not only learn from my tutors, but my colleagues also.
The chance to take part in straight plays as well as musicals and the variety of texts that I studied and performed made me become a more confident, knowledgeable and professionally-minded performer. I went on to win a place on the BA Acting course at Mountview Academy of Theatre Arts and feel I couldn’t have progressed on to such a course without the challenges, teachings and guidance I experienced whilst studying Drama and Theatre Studies at Hayes Sixth Form.”
Joanne recently portrayed the title role in the critically acclaimed “Eugenie Grandet” at the Assembly Rooms in the Edinburgh Festival.

“The A Level Drama course allowed me to try my hand at an array of dramatic styles with friendly, encouraging and constructive direction from the teachers. The devising elements were particularly memorable for me as it was the first time I had ever performed a piece of work that was not scripted. We were allowed to build innovative and diverse performances and the teachers were always on hand throughout each day to give guidance. This brought out confidence and that I did not originally have.
Through this, I was able to communicate my ideas far easier when I went on to study Drama at a degree level and a Master’s degree in creative writing. My passion for devising that stemmed from my A-Level studies in Hayes has continued and I now seek to create similar performances like this in London’s fringe theatres.”
Luke is the founder and Artistic Director of Muzzle the Pig Productions, specialising in online comedy and theatre. His first full length film – “A Criminal Audition” – is currently in post-production.

“The Drama department at Hayes gave me the inspiration, belief and encouragement to pursue a career in Acting. Whilst studying for my A level in Drama and Theatre studies at Hayes, I gained invaluable experience through the performances we put on, seeing a varied spectrum of live performances and most importantly from the guidance and honesty of both of my teachers. Without their support and dedication, I strongly doubt I would have got into Drama school or have become an Actor.
After Hayes I studied at East 15 Drama School where I did a cert/HE and then went on to do my degree at The Birmingham School of Acting. Hayes gave me the Foundation I needed to pursue a career in performance.”
Sophia is a founder member of Tuppence Films, a production company striving to give women a stronger voice in Theatre TV and Film.