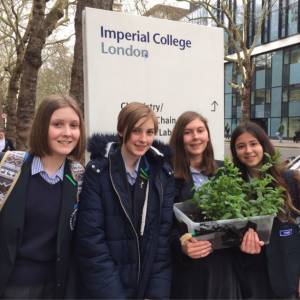 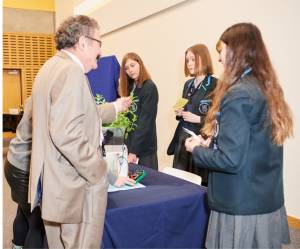 The Imperial College School Faculty of Natural Sciences Annual Science Competition invited students from schools across the world to submit their ideas for turning science into life changing ideas and technology. Team Mitro-Power from Hayes, comprising Year 10 students Imogen Atkins, Ruby Gaskell, Miranda Gillette and Lara Tatli, reached the final round of the competition this week, beating 150 teams from other schools around the world to win their place.

Each idea had to meet one of the UN Goals for Sustainable Development. Team Mitro-power researched, built and demonstrated a microbial fuel cell with the aim of meeting the UN’s goal of Affordable and Sustainable Energy. The fuel cell combined plants and bacteria to generate electric current, and could be used in rural areas in developing countries to provide localised microgeneration of electric power, thereby promoting the development of lower-income off-grid communities around the world.

During the finals event, held at Imperial College, each of the six teams had to give a 15 minute presentation of their idea as a video and then practical demonstration to a panel of judges. The judges quizzed the teams after their presentations and then deliberated before awarding the prizes. The judges included Embryology pioneer Professor Lord Robert Winston, the first British person in space, Helen Sharman, and Women in STEM ambassador Dr Jess Wade.

It has a been a real pleasure to mentor Imogen, Ruby, Miranda and Lara as they have formulated, tested and developed their ideas. They have demonstrated great fortitude and creativity during the competition and I am pleased that they have been inspired to consider studying science at A-level and beyond.
Mr Feakes, Science Department